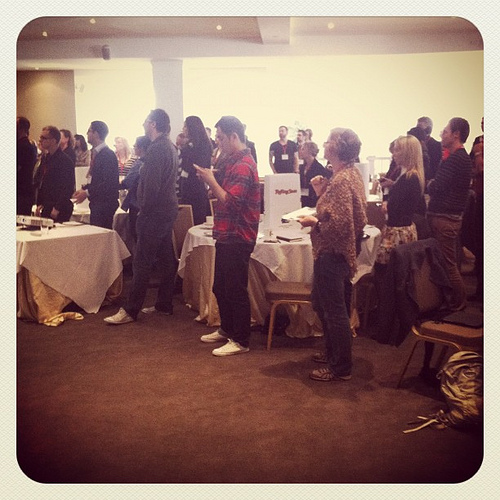 Getting the audience into 'Spatial Touchpoint Mapping' as part of our presentation at #SD12 : Image care of @docbaty

Some organisations and practitioners have been effectively practicing Service Design for years. However in terms of its profile as a design practice Service Design is still in its infancy in Australia and New Zealand. As such it was great to be part of the second Australian Service Design Conference, organised by Donna Maurer and Steve Baty, which took place on the 4th of May in Melbourne. Like all the UX Australia conferences, the conference focused on creating a platform for local practitioners to share experiences of actual (service) design projects.

Presentations by DMA on why they love Service Design in the Public Sector, Alex Ritchie’s recount of E2’s multi-channel approach to the redesign of OPSM Services and the story of NAB’s blended design teams were particularly rich in this regard. Kitty Rahilly and I also contributed to tales of service design on the “inside” with a presentation on the Communicating, prototyping and implementing ReachOut.com’s future service strategy. All presentations will be up on the site with audio in the next month or two.

Several interconnected themes seemed to emerge throughout the day which I’ve attempted to capture below. While these didn’t necessarily reveal anything new, they did reinforce some of the skills and value we bring to organisations as designers. They also highlight some of the issues that Service Design foregrounds about design practice (as you’d expect from a SD conference). There was quite a bit of repetition throughout the day across some of these points (and lots of mention about the value of prototyping etc). Although the aim was to showcase empirical experiences of doing service design, some basic theory, grounding or definitions of key service design principles might have also helped frame and build up the level of dialogue somewhat. That said, Iain Baker’s talk on the Value of Consciously Design Services did finely weave together many of these themes in a reflective and provocative way, as he asked people to reflect more deeply and be more robust in the way that they claimed the value of bringing design to services.

The themes in no particular order:

1. The role of visualisation in helping organisations understand themselves.
Sketching and mapping are integral design activities and essential to communicating and progressing design in cross-disciplinary teams. DMA’s presentation in particular demonstrated the power of visualisation in helping organisations and clients reflect on current practices, identify opportunities for improvement and make the decision to change.

2. Going beyond artefacts as deliverables.
Connected to the above the role of artefacts as tools for supporting the ongoing design and delivery of the service was recurrent throughout. Speaking about NAB’s banking prototype @hwakelam noted “we are no longer just producing nice artefacts to put on the wall, the discussions transcend the artefacts now”.

3. Design never ends.
This came up a number of times and while not a new concept  (‘design in use’ has always been at the centre of disciplines such as Participatory Design) it’s easier, and arguably more necessary, to understand how to deliver on this in the context of services and co-creating value, than it might have been when designing a washing machine, for example. Another @hwakelam quote spoke to this well: “Service Design is about ‘all the things’ all the time, & we need new ways of working to do it”.

4. The changing role of designers and agencies.
The relevancy of the traditional agency model has been questioned over the last few years in the context of service design and user experience, which is ongoing, and needs to be driven from within the organisation rather than an external agency. Although this wasn’t raised explicitly, Iain Barker noted that despite this, some of Meld’s biggest clients are those with the biggest internal design teams. Someone (perhaps in the DMA talk) talked about the relationship being one of “partnership”, and the idea that our role extends to capacity building within organisations was reflected in various talks. The notion of Blended Design Teams was perhaps another emerging model, where consultants became ‘co-workers’ and expertise and leadership was shared and pooled in response to the complex and large scale nature of the project. The idea that service design is a connecting field that brings different kinds of practices together was an important aspect of this theme.

6. The challenge of delivering effective services in silo’d organisations.
This is a challenge that many practitioners can relate to and was summed up by Iain “I feel like a marriage guidance counsellor sometimes – helping different parts of the organisation get along”. Trent Mankelow of Optimal Usability suggested that the internal structure of client organisations can actually make service design impossible observing “many of our clients are not ready for service design”.  It did make me think that as we (as a profession) slowly get to be engaging with our clients at board room level we can start to draw their attention to this a bit more…perhaps not directly but more at a public, cross-industry dialogue level.

7. Learn fast.
There was a lot of emphasis on failing fast. Iain Barker put a twist on this by suggesting instead we should be talking about “learning fast”, much more palatable to the client than the idea of failing.

8. Clients don’t call it Service Design – they call it customer service.
The lack of recognition for the term service design has been a topic of conversation for years, the fact that it is still coming up perhaps ought to tell us something…?

There was also quite a bit of talk about ” I just worked it out for myself how to do it and started selling it” which again reflects something of the market here in Australia and New Zealand. In Yoko Akama’s promo talk about the Melbourne Service Design Network (a great resource for local case studies – please contribute!) Yoko described the Australian Service design industry as being a bit feral, partly in reference to the absence of formal training here as compared to Europe. Both the conference and initiatives like the Network are an important part of building up a Service Design identity and practice in Australasia. I look forward to the next one and also to more related discussion and action here in NZ.

For further write ups and info on the conference see:

@overlobe Storified the tweets from the day

This blog covers work, thinking and experiences on participatory design, social design and design research by Penny Hagen. I help organisations take a collaborative and participatory approach to the design and implementation of new processes, policy, strategy, services and initiatives. The opinions shared here are solely my own